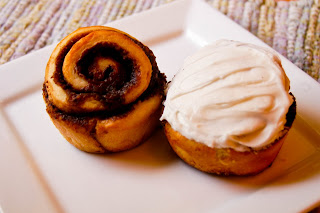 I often refer to my daughter Emily as my "mini-me." I swear I've known since the day she was born that she was just like me. She looks like me and acts like me right down to stubbornness and sarcasm. However, she has one trait that I know she definitely did not inherit from me... she is not a sweets eater....except for when it comes to cinnamon rolls (ok and chocolate ice cream.) I have never seen anyone, child or adult that can polish a tray of cinnamon rolls off like Em can. Cinnamon rolls have always been one of those things that I don't really like to make, most likely because I hadn't found a really good, reliable recipe, until a few weeks ago. Em had asked me one morning if I could make them for her, so I went to Allrecipes and found this recipe. I've made it a few times since, and I think it's a keeper.

Heat milk in a small saucepan until it slightly bubbles, and add 1/4 c. butter. Stir until melted. Cool until lukewarm (or I added ice until it was lukewarm and then omitted the 1/4 c. water.) Once the milk has come down in temperature, stir in yeast until dissolved (make sure milk is not too hot or it will kill the yeast.)

In a mixing bowl, combine flour, sugar and salt. Add milk mixture and egg, mix all together. Add more flour if needed so that dough is not super sticky. Turn dough out onto a floured surface and knead until smooth, and then cover and let rest for 10 minutes.

Roll dough out into a rectangle and spread with softened 1/2 cup butter. Mix together brown sugar and cinnamon and then spread over the butter. Roll up, pinch the seam to seal an cut into 12 equal pieces.

Place rolls in 12 lightly greased muffin cups and let rise for 30 minutes. Bake in a preheated 350 degree oven for about 20 minutes, or slightly browned.
One change that I made to them was melting about 1 1/2 c. of milk chocolate and spreading it on the dough before the butter. They baked up great, and Emily said they tasted amazing.
Posted by mpaigew at 7:48 AM

Hi,iºam Raul from Madrid,Spain,you did a nice job with this website,i like your articles and you photos,i will visit you again soon to see the new post,maybe you want to visit some of my sites
Nehoiu online ,Nehoiu is a beautiful town in Romania, Marketing This is one of my bussines, Asesinos seriales ,this is a blog about serial killers, Directorio web SEO ,this is a free but with reciprocal link web directories where you can submit you sites,i hope you will find it usefull.bye bye

I wish there was smellivision they look delicious and I will try the recipe. I am from the UK so what is a Cup equivalant to ?

This looks absolutely delicious. Your child sure has a nicely developed palette ;)