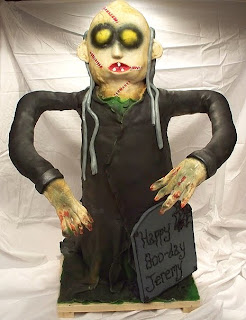 Jill's son's birthday is this coming week, so she decided to have a Halloween theme party for him. After telling me he wanted a haunted house cake, I went home and scoured the internet for some inspiration. Somewhere among the Halloween cakes, I found the original version of this cake from Courtney's Cakes. After seeing her version, I really wanted to make it (and had to convince Jill's son that he didn't really want a haunted house!) I had never worked with an internal structure and was really excited to try it. Courtney's version is a bajillion times better than mine (the head of mine kind of cracks me up a little!) but I think for my first time using a structure like this I didn't do too badly! And I think I will be declared the coolest neighbor evah.
Posted by mpaigew at 4:00 AM

Me again! I gave you a blog award - come see!