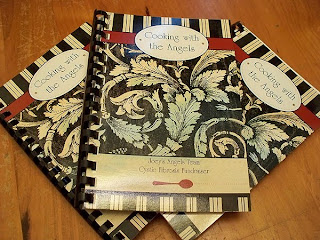 Last November, when my blog was just starting and I had no followers I posted about the cystic fibrosis cookbook that I put together as a fundraiser. Since more people are reading my blog I thought I'd post about it again, especially since I've had some updates.

I put this cookbook together for a fundraiser for the Great Strides walk; a walk that I've done since I was a little girl. My brother was diagnosed with CF when he was 12 (I was 6.) Cystic fibrosis is a fatal, genetic disease that affects primarily the lungs. Since he was diagnosed, there have been several ups and downs, but the biggest changes have come this year. In March I received a phone call from my mom that my brother wasn't doing so well (he was already in the hospital) and he was going to be reactivated on "the list." His condition was very, very serious and if he didn't have a double lung transplant right then, he probably wasn't going to make it too much longer. In June, after 72 days of waiting, he received a new set of lungs.

In August while he was still in recovery I went and spent a week with him. I cannot say how incredibly thankful to the donor I am for his selflessness when he chose to sign up to be an organ donor. My brother and I had grown apart, and if it hadn't been for this donor choosing to pass life on to someone else, I never would of gotten the opportunity to know my brother again. Again I am just so thankful and grateful to his donor.

I am a big believer that things don't just happen by chance; everything happens for a reason, and there is a bigger hand in the picture. After I went to visit my brother in August, I was on my way back home. I had a connecting flight; on the first flight I got on the big, completely full plane and sat down in my seat next to a woman. We started talking immediately, and the conversation quickly turned to why I was visiting the area. I told her that my brother had just had a double lung transplant, and her eyes got huge. I continuted, and told her that he has cystic fibrosis. She said, "You are never going to believe this...my SON has cystic fibrosis." She started telling me about her son, Joe......yes, my brother's name too! We talked nonstop the entire flight; neither of us even remembered taking off! Earlier this week I got an e-mail from this woman. Her son has taken a turn for the worse and has been in ICU for the last several weeks. His wife is pregnant and is being induced today. It's weird to me that this woman I barely know could touch my life so deeply like she has. And it hurts me so much to know that this disease has brought yet another person so close death. It's not fair.

I know this is a foodie blog, and this isn't really a foodie post. I just wanted to bring some awareness to CF and to organ donation. If you aren't an organ donor, please consider becoming one! You don't have to wait to renew your driver's license...you can go here and sign up today. My brother is an awesome, awesome person and I am so lucky to have him in my life! If you ever see people campaigning for CF fundraisers or Great Strides, please consider giving something. Scientists and researchers are pretty close to finding a cure, but like everything else in our world...it's expensive! It breaks my heart and brings me to tears every time when I go to Great Strides walks and see the little kids that have CF. I have seen their future through my brother if a cure is not found.
Posted by mpaigew at 4:30 PM

I am a physical therapist who has worked with patients with Cystic Fibrosis for thirty + years, hoping to bring them to transplant. The journey is a long and complicated multi-system devastating spiral. I admire your brother, your family and you.

Hi,
I was just wondering if you are still selling the cookbook? And if so, how can I get one?
Thanks,
Danielle