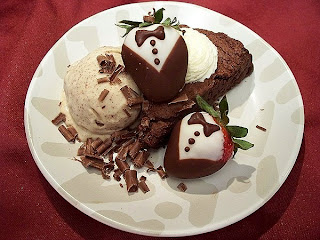 Back in the fall, I came across http://www.tastespotting.com/ and it quickly became one of those sites that I had to check every day. I love looking at pictures of food, and that's exactly what that site is...beautifully taken pictures of any type of food you can imagine. While on the site, I kept seeing "Daring Bakers" pictures and was intrigued. Finally last month I decided to join up, and my first challenge was Chocolate Valentino (Flourless Chocolate Cake) and homemade ice cream. It was a great challenge, perfect for Valentines Day.

Chocolate Valentino
1 lb semi-sweet chocolate, rough chopped (I used chocolate chips)
1/2 cup plus 2 tbs. unsalted butter
5 large eggs, separated
-Place your chocolate and butter in a double boiler and melt, stirring often.
-Place egg yolks in one mixing bowl, whites in another. Whip up whites until stiff peaks form, but do not over mix (the result will be a dry cake.)
-With the same beater, beat the egg yolks together. Add to cooled chocolate.
-Fold 1/3 egg whites into the chocolate mixture, and then the remaining 2/3. Mix until no white shows, but be careful not to deflate.
-Pour batter into a prepared pan (3/4 full) and bake in a preheated 375 degree oven. Bake for approximately 25 minutes, or until an instant read thermometer reaches 140 degrees (cake top will look like a brownie, and a cake tester will appear wet.)
-Cool for 10 minutes and then unmold.

At this point, I was too lazy to try to get my ice cream maker out of our storage shed (to be honest, I don't think I could of gotten it out,) so I chose to go the longer, non-ice cream maker route. I placed the mixture in a shallow dish, and put it in the freezer. Every 30-45 minutes I stirred it, making sure that the edges were scraped. The end result was awesome; super creamy.

The cake was incredibly chocolaty and a little on the bitter side. By itself, I didn't care for it. When I paired it with whipped chocolate ganache and the cinnamon ice cream, it was unbelievable. SO GOOD.

All in all, my first challenge with the Daring Bakers was quite successful! I am really looking forward to the next challenge!
Posted by mpaigew at 4:26 AM

Like I said before, beautiful and inspiring! Great work!

Congrats on your first challenge - it looks wonderful!

Congratulations on you first challenge ^_^ I love your cinammon ice cream idea. yummm!!

What a wonderful way you've met your first Daring Bakers challenge. It is my first challenge, too. The cinnamon ice cream sounds quite yummy and I adore the little tuxedo strawberries you incorporated into your presentation. Beautiful!

Congratulations on your first challenge! This was my first too! The love cinnamon and I love ice cream. What a nice combination. Nice job on the strawberries too!

Welcome to DBs! Lovely job...your dressed up strawberries made me smile!

Welcome to daring bakers! Great job on this month's challenge!

I went for the cinnamon ice cream as well. :) Fabulous job on your first challenge! Welcome to DB!

The ice cream sounds amazing!!
Those cute tuxedo strawberries remind me of the ones on our grooms cake for our wedding a few years ago! SO cute! well done!

Gorgeous cake. Love the tuxedo strawberries. Aren't they just the most adorable thing. delish to eat too. I made some as decorations for a friend's birthday.. perfect for a guy's birthday

Oooooh what beautiful strawberries or shall I call them handsome! Great job!!

Beautiful work! You inspired me and I made the cinnamon ice cream. Dare I say, it rivals Hagen Daz! Thank you for the post-I too , am obsessed with TasteSpotting!

Cinnamon ice cream is a perfect pairing with the chocolate valentino! Excellent work on your first challenge! :-)

I LOVE the tuxedo strawberries - makes for an awesome presentation! Mine never come out as nice as yours though, and I end up eating most of them lol Nice work all around - and love the photo!