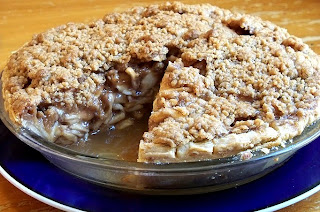 One would think that after making 100 (yes, you read that right...ONE HUNDRED!) 5" pies for wedding favors a few weeks ago that I would be SO over pie making. However, after a week of serious cake making, and after still seeing a peck of Ida Reds (which I purchased from an Amish farm back home for $3...the whole bushel was only $7!) still sitting in the corner of my kitchen, I decided to whip up an apple pie to stick in the freezer. The reason I really like pies is probably (other than the crust) there is no measuring....some of this, some of that...whatever I feel like putting in. And somehow it always turns out great. Since I only had enough pie dough for a single crusted pie, I decided to do a crumb topping. WOW...talk about a bad day to start doing a low carb diet! I had a tiny bite of the piece I cut (so I could take a picture of the inside)...I am a sucker for the crumb topping. To make my crumb topping I used a stick of butter, added flour and brown sugar and mushed it all together, adding more flour until I got a crumbly texture. Mmmmmm..... 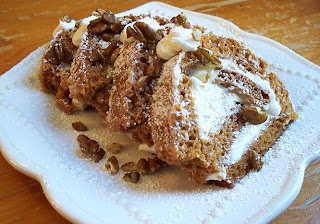 My second quest today was to make a pumpkin roll. I used this recipe from Allrecipes. Ehhh, it was ok. I chose to do a cream cheese buttercream instead of the filling, which was my mistake. Another problem that I had with the recipe was the pan size. I chose to use a 12x12 pan, which is larger than what is called for, and I still don't think it is large enough. I had a tough time rolling it without the cake cracking. I have found that the thinner the cake is, the easier it is to roll. I might try it on a 1/2 sheet pan next time, maybe with a different recipe.
Posted by mpaigew at 11:00 AM

100 pies! Whoa - good for you! I think the pumpkin roll looks great - but I'm so like you in having to perfect the recipe!

It was so nice meeting you at Laura's, Paige. I still can't get over the beautiful cake you made for Meghan. I'm surprised you don't have a picture of it here--everyone will love seeing it.

Hope to see you soon to learn the fine art of fondant from my new hero!
Rosalie